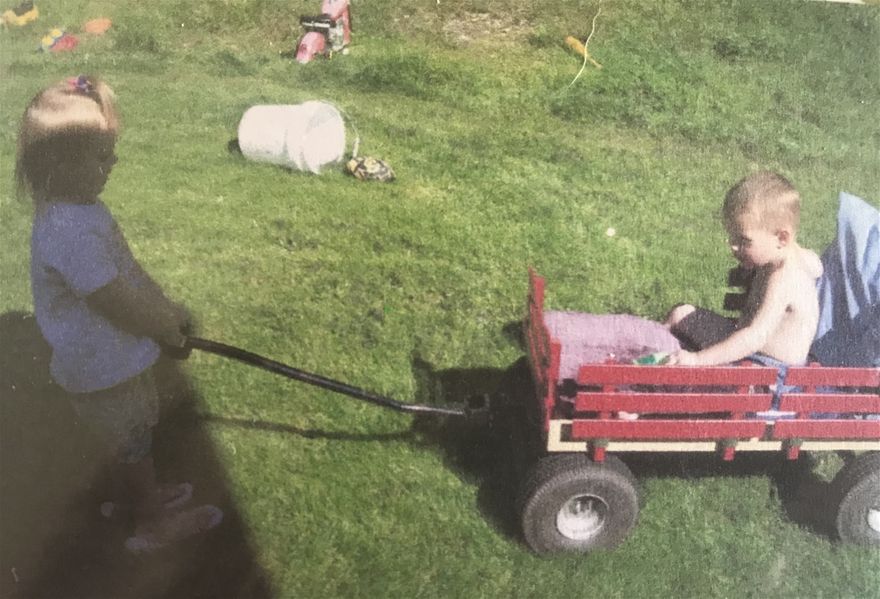 Our youngest son's "best friend" growing up has been a little girl named Abby. They were inseparable from the day they were born and still enjoy a good fishing hole as teens. Wayne and I literally "high-fived" our expectant friends in the hospital corridor as we left with newly born Nate, and they arrived to have Abby. The kids were naturally good playmates, as we all spent much time together through church activities and doing life together.

Raising boys, we've had our share of "injuries"…one event, still referred to as "Nate's broken leg", occurred when he was around two years old. As soon as he returned from the hospital, sporting a cast from his toes to his hip, Abby and her mom arrived with books to read and many colorful markers to start coloring up the dreaded cast.

Throughout the "healing process", Wayne was gone out of town for work so Abby would come visit Nate, and her mom would check in on my sanity--or lack there of. During one of these visits Will confessed his dark secret: He had pushed Nate from the chair, to the "island" of cushions, trying to avoid the "hot lava"….but Nate's leg was stuck. Therefore, Will had "broke Nate's leg". So you can understand why my sanity may have been questionable at this point in our life. Along with all of the pre-existing crazy, was the feat of trying to keep a cast on a two year old boy in the middle of summer --a boy that was jumping off the coffee table the first night home from the hospital… (Return to doctor on day two for a second cast, because first was knocked lose in his jumping event!) --a boy I had lost early one morning, to find he had dragged himself from bed before daylight, opened the sliding glass door and scooted himself off the deck, down the stairs, across the lawn, through a ditch, up a hill, into the woods---so he could play trucks! (Return to doctor AGAIN, because said ditch was full of muddy, stinky water!) There was also a third event of the cast being damaged, but at that point I figured we were close enough to being healed--and couldn't handle anymore looks and questions from the nurses at the doctor's office…I just couldn't.

One beautiful, sunshiny day, while a group of friends were visiting, we allowed Nate to sit in his little red wagon in the back lawn and watch the kids all play. The "sitting" soon morphed into Abby and Will "giving Nate a ride". Your mind can only fathom where this ride headed. Yes. Through the back lawn, down over the bank, across the driveway, ending with a crash into railroad ties that bordered the driveway. I can still hear Abby's little voice as the wagon bounded down the hill, "Oh Nate!" and she clasped her hand over her little mouth and closed her eyes tightly. Nate was thrown from the scene of the accident, laughing hysterically, and was left without any further harm than his already broken leg. (This may have been where my grey hair started.)

This time of year we tend to visit amusement parks and fairs where the rides spin and zoom, twirl and sink. Rides are very much like life if you think about it. There are the high points of the roller coaster where we sit right on that edge of our seat anticipating the next stretch of excitement that brings pure joy! I enjoy the lazy river where one can float along carelessly and rest, occasionally receiving a good splash to refresh in the heat of the day. There are drops that dip us into a fearful low, and straight down slopes that sink us into the frightening unknown.

Even with the unknowns and the fears, we still get on the ride. Why? We take the ride because we know there is a well trained operator controlling that ride, and their occupation is to keep us safe and show us a good time. Yes, a lot like life.

"The Lord has done great things for us, and we are filled with joy." Pslam 126:3

With those spins and dips, zooms and twirls, we laugh--sometimes so hard our sides hurt. In those dips and dives we become so fearful, the bottom sinks out of our bellies. And sometimes the cool water is breathtaking. Through it all, we can trust that God, the "operator", is watching over our ride of life, doing great things.