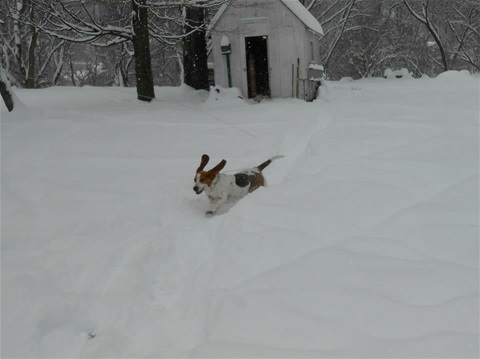 naughty "shwooshing" through the snow...

I have shared previously of the creatures we have had pass through our home.  Currently we are what you may refer to as a small "rescue center".  Along with Naughty Dog, there's Bella, the German Shepherd, Lou Lou the Golden Retriever, Steve the Cat, and 17 chickens of mixed kinds. (I used to have 18--but one of my Rhode Island Reds met a terrible fate when she confused the shed window with an open door.)  Our numbers are quite small compared to previous days.  We've also, over the years, housed Guinea pigs, frogs, fish, and even a bearded dragon named Buddy.  In our situation, most of our furry friends were named when they came to live with us.  Bella was one of them.  She is quiet, reserved, and a lady of high standing.  She has an important job to do protecting our family--and most all of Maple Street.  She loves to "herd" our chickens back in their fence if they happen to escape.  I'm unsure if it is a sign of her loyalty and wanting to be helpful---or if secretly she is finding enjoyment in scaring the tar out of the hens. I'm pretty sure it's the latter.  Lou Lou is the goofy, young, playful, needy one.  Always wanting another animal to ensue a chase, or human to hold her.  (Did I mention she is almost 85 pounds?)  If you visit our home she will nudge your arm, or even stand on her back feet attempting to place her big, floppy feet around your neck, lay her huge, golden head on your shoulder, and "hug" you. Yes.  She hugs people.  Sometimes her "nudges" are quite inappropriate as Lou Lou has no concept of "personal space", and sometimes her lack of conception proves to be quite embarrassing to me as a hostess!

This past week has been the first of our snowfall for the season.  Just in time for Christmas.  Around 9:00 Saturday morning the boys went out to help my husband hook up the plow and dig out our driveway.  I was in my warm kitchen baking Christmas goodies when I noticed Naughty had not gotten out of bed yet.  (She had been there since 10 the night before!)  When I went to the back room to ask her if she thought it was time to get up (Yes, I talk to her.) I was met with a yawn as she proceeded to roll over and commence snoring.  Her eyes didn't look quite right to me so I bent down to check her closer.  She appeared fine, but her nose felt warm.  I let her sleep while as I finished the dishes, then woke her insisting she go out to the bathroom.  (It cannot be healthy to hold it THAT long!)  As I took her by the collar I slipped my fuzzy lined moccasin slippers on my feet.  You know--the ones that are nice and toasty but have no traction at all?  Yes.  THOSE ones.  As I opened the door, sluggish Naughty BOLTED.  My favored footwear doubled as a set of skis as I began my slalom across the fresh snow on our back porch.  I yelled, "NOOOOO NAUGHTY!  STOPPPP!"  I knew if I let go of her collar she would disappear in the snowy wonder land and most likely I'd be calling Officer Rumfelt again!  As I saw the steps approaching I tried to dig in with my traction-less slippers…I had to let go.  It was that, or ride it out down the stairs and spend Christmas in traction.  Off she went.  My poor, sickly, "can't get out of bed", Naughty tearing through the fresh snow as if she was floating!  Thankfully, right into Wayne's arms at the shed.  She had seen him and gotten so excited!  She almost broke me---but to get to "The Dad", she deemed it worth it.

As I think of the names given to our furry friends, some given by previous owners, some given by us, I am reminded of  HOW a name was chosen.  The obvious one being Naughty Dog.  Usually we chose a name based on how a person or animal appears or behaves.  And usually that name, especially with animals, goes on to define their personality or being.  In what felt like an eternity of getting dragged through the snow that day, I must have hollered "NAUGHTY!!" a dozen times. Needless to say, the neighbors had to know she was at it again!

The boys and I have been doing a study on "the names of God".  It's interesting to see how many names He truly "has".  As we approach this weekend, I am reminded of the name our Lord was given in a message delivered by the angel Gabriel to Mary.  "But the angel said to her, "Do not be afraid, Mary, you have found favor with God.  You will be with child and give birth to a son, and you are to give him the name Jesus.  He will be great and will be called the Son of the Most High.""  Luke 1:30-32   JESUS.  He was called by many other names throughout the Bible:  Adoni. (Genesis 15:2)  Elohim.  (Genesis 1:1)   Savior.  (Matthew 1:21) Just names a few. Reading through various scripture references we see that Jesus, just like Naughty,  "lived out" his name(s).

God sent Jesus that night, so that we may be free of our sin.  We become free of that sin when we see ourselves in the helpless state we are in, turn to Christ, ask for His forgiveness and take on His name--"Christian"…become part of His family.  When we take on His name, we also should take on what comes with that name, the attributes of Christ.  We are still flesh and will struggle.  But it’s  as my friend says, "Onward and upward!" Those are her well received, encouraging words over a cup of coffee as I share struggles and failures with her regularly.

If you haven't taken on the name "Christian", if you aren't part of the family, let this year be different.  Confess your sin to The One who made you, ask for His forgiveness, become part of The Family.  View Christmas in a whole new light.

"She will give birth to a son, and you are to give him the name Jesus, because he will save his people from their sins."  Matthew 1:21

I pray this is the moment, the season, when you break lose--run to your "Dad", our Father in Heaven, just as Naughty ran to hers. (Just don't put anyone in traction while doing it?)

And yes, my chickens also have names.  The kids in our neighborhood helped our boys name most of them.  We have "Boneless", "Wing", "Fluffy Pants", "Patty"….but my favorite happens to be the Buff Orpington I refer to as "Latifa".  The name should explain it all…. 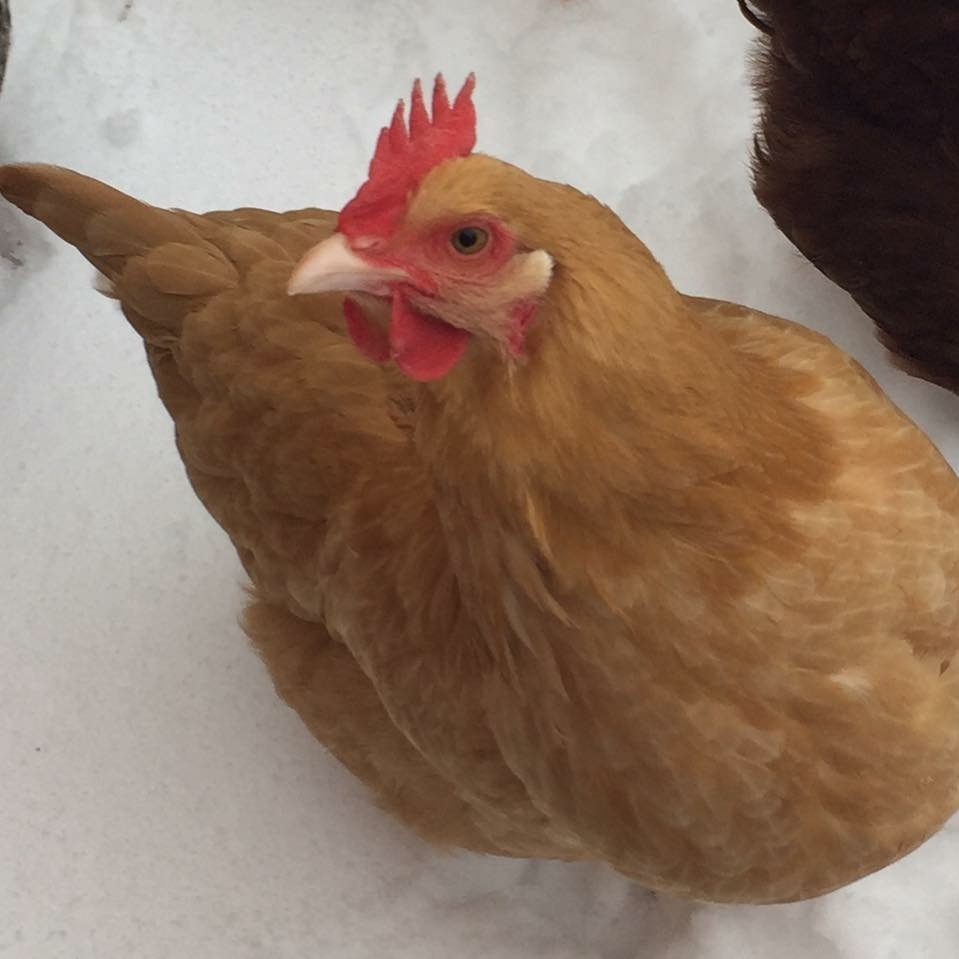