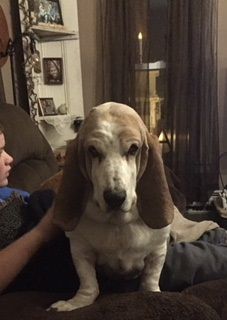 the face of disappointment is best displayed in a wrinkly, old, hound...

After a month of eating myself into a sugar cookie coma, I had decided it was time to get back to "normal" eating patterns.  I do have them, just not the patterns that others would perceive.  Being a "fluffier" woman, one may think I survive my days fueled with coffee and tubs of chocolate ice cream.  Granted--I DO down my share of coffee, I'm really not prone to major ice cream consumption.

This particular day I had constructed myself a fine selection of mixed greens, veggies, cheese, and taco seasoned chicken.  Mind you, as soon as the construction process had begun, a certain nose in the house was alerted and my kitchen was overrun with a naughty creature and her insatiable taste buds drooling all over my hardwoods .  Naughty LOVES tacos. The aroma of an opened package of  "Casa Mamita" can yank her from her slumbered state in record time and she is quickly alert and poised between my feet and the counter or stove top singing the song of her people.

As I took my chair at the table, Naughty positioned herself in her "lunch time pose"---on the floor to my right, sitting straight up, one foot slapping at my leg. Her verbal disapproval of not receiving her own plate began before my fork hit my mouth.  A normal meal with Naughty.  In previous years she would go as far as pulling a chair out and sitting eye level with me, but since the "cup of coffee incident" she no longer chooses to be so blunt in her disobedience.

After a while of her bantering, I gave in and tossed her some shredded cheese from my salad. She delightfully scurfed down her prize and then slapped me again with her big ole paw.  The last "toss" I made her way appeared to be cheese.  It was almost the same color as cheese, it was shredded the same as cheese…but it turned out to be a shredded carrot.  With all that being said, I need to add the disclaimer that Naughty DOES NOT share my idea of consuming a well balanced diet.  She leans toward a menu more focused on dog food, pepperoni, cheese, cookies, and the occasional swiped pizza or sweet treat. (Remember the apple pie?)  The look on her face was priceless.  It was as if she had been completely betrayed.  Sheer disappointment.  The noises that proceeded to come from her while she convulsed and spat the carrot out on the floor were quite disturbing.  One would have presumed I poisoned her.   She threw quite a hissy fit and waddled---LOUDLY-- to the rug sprawling out in what we call a "basset hound yoga position".  The flames shooting from her eyes burned deep into my soul as I continued to finish my lunch, smiling.  (I was quite amused with myself!)

Like Naughty, we too have all faced those great times of disappointment.  Not getting the job we were qualified for, ordering a black coffee to find your first sip loaded with creamer (I'm still working through this most recent event of deep betrayal!), going to the fridge to find your sibling ate the last of those special leftovers, or-- the hardest one for me--being let down by someone--a someone I have "let in", trusted, confided in. I think of Jesus, his betrayal by Judas in Matthew 26 for a whopping thirty silver coins.

"I have told you these things, so that in me you may have peace.  In this world you will have trouble.  But take heart!  I have overcome the world."  John 16:33

"Consider it pure joy, my brothers, whenever you face trials of many kinds…"  James 1:2

In these verses Jesus pretty much confirms we WILL have trials, struggles and  disappointments. We WILL get thrown a carrot every once in a while--when we are expecting cheese. If you read His Word in entirety, He also gives us the tools we need and encouragement to help us persevere through the heartaches of this world. One of my favorite places to go to be reminded of God's Promises is the Psalms:

"The Lord is close to the brokenhearted and saves those who are crushed in spirit."  Psalm 34:18

"He who dwells in the shelter of the Most High will rest in the shadow of the Almighty.  I will say of the Lord, "He is my refuge and my fortress my God in whom I trust.""  Psalm 91:1-2

"He heals the broken hearted and binds up their wounds."   Psalm 147:3

So when we feel the pain of disappointment consuming us, when our heart hurts so much because our person has "pulled a Judas"--we need to look to The One that has promised He will never leave us…He will never disappoint us.

"So do not fear, for I am with you;  do not be dismayed, for I am your God.  I will strengthen you and help you;  I will uphold you with my righteous right hand.  All who rage against you will surely be ashamed and disgraced;  those who oppose you will be as nothing and perish.  Though you search for your enemies, you will not find them,  Those who wage war against you will be as nothing at all.  For I am the Lord, your God, who takes hold of your right hand and says to you, Do not fear;  I will help you."  Isaiah 41:10-13

Do you believe our God is an AMAZING GOD?  When I began penning this week's blog, working through thoughts, I had no idea what was ahead of me--or many others around me.  I had no clue this week some would experience the biggest heart aches they ever have and my boys would be crushed by a breach of trust with an adult figure in their lives--someone they looked up to.

Nor did I know a family member would "let us down", and a dear one's world would be turned upside down.

But God knew…He was working in these areas long before I even knew they were happening--through this study He lead me to, through others who offered great words of encouragement, down to the songs that were played at worship time.

HE KNEW.  And that is just awesome.

"The Lord is my light and my salvation--whom shall I fear?

The Lord is the stronghold of my life--of whom shall I be afraid?"